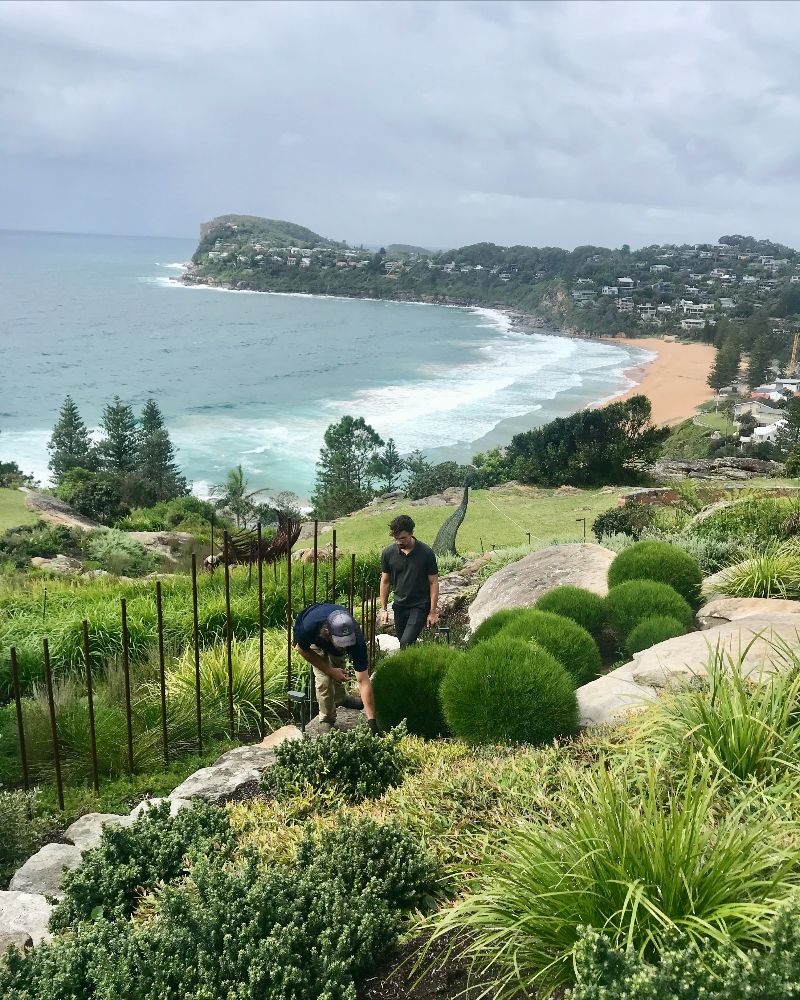 Architecturally designed by Peter Sutchbury Architecture, Outcrop House is an award-winning home that saddles the landscape escarpment above Whale Beach. We were approached by our clients to rejuvenate the existing garden in the front and rear spaces of the property.

Our brief was to enhance the sense of place and to ensure an environmentally sensitive approach, while exploring the specific site conditions and researching a safe habitat for native birds. Given the spectacular view of Whale Beach, any plans for the rear garden needed to ensure that views were enhanced and not obstructed. 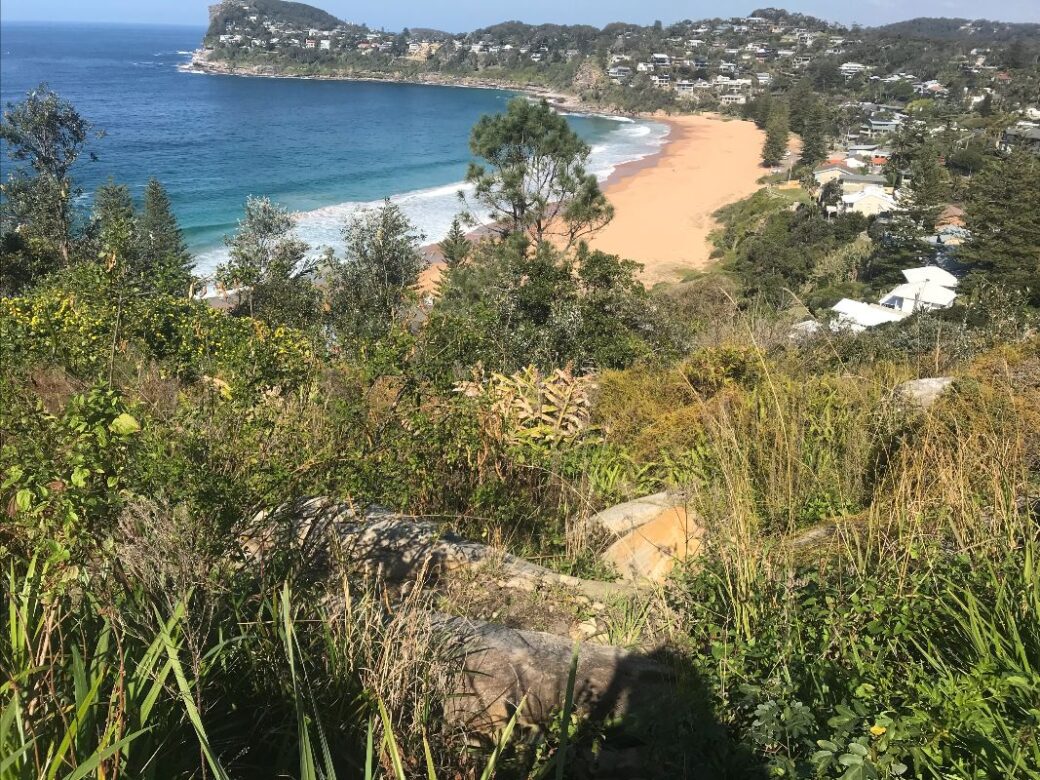 The existing garden was tired and overgrown, and had largely been left to its own devices with weeds running rampant up and down the hillside. Our clients had some existing design features which we aimed to enhance, including a yoga deck emerging from the rock face, steel rods lining the paths, and a number of large-scale sculptures.

Any proposed plants needed to be carefully selected and sourced to ensure that they would thrive in such an exposed environment, with new planting also needing to be protected from bandicoots and rabbits until established. Another key consideration was the natural watercourse that ran down the escarpment.

The existing soil was tired and sandy with not much microbial activity. We began by removing a lot of the weeds and adding nutrients back into the soil via fertilisers and compost. Removing the existing weeds and their root structures created further challenges though, as it disturbed and lifted the soil making erosion a very real threat.

To combat this, we lay a number of coir logs (made of coconut fibre). These coir logs were pegged into the ground and provided a tiered support structure down the side of the hill, while still allowing water to pass through and distribute among the plants. They slowly decompose as plants take root, allowing for a cost-effective and environmentally friendly alternative to retaining walls while also reducing the need for irrigation with plants only requiring extra water in the warmer months.

The steel rods were already in place as a guide along the paths, so we factored them into our landscape design, installing complementary lighting along the paths and up-lighting the existing sculptures, which brought an incredible poetry to the hillside after dark. 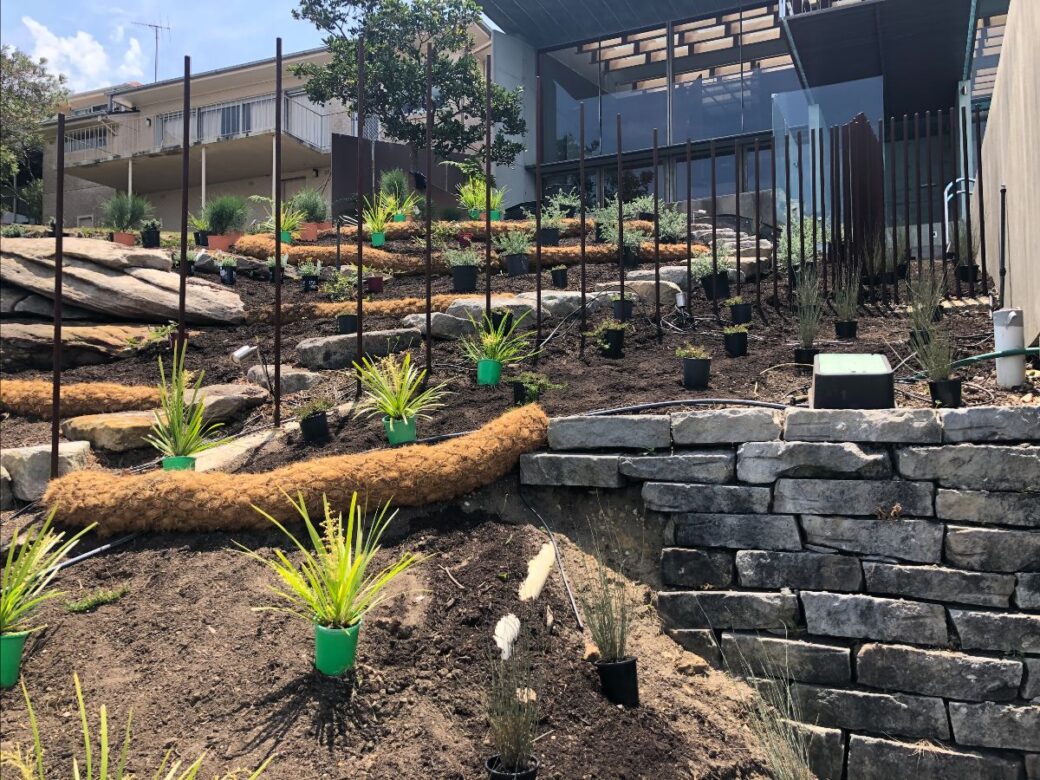 There were a lot of weeds among the existing planting which proved to be a greater challenge than we’d anticipated. Chief among them was dollarweed, a pest along the coast, with roots spreading far and wide across the hill. Even as we removed these weeds and introduced new planting, the dollarweed sprung back and required consistent maintenance work to eliminate.

A natural water course also runs through the property, draining heavy rainfall down the escarpment from the street above. To avoid our beautiful new garden being washed off the side of the hill, we needed to reduce the speed of water run-off with rocks and careful plant selection. It was quite shallow so we made the decision to leave a lot of the existing planting around it in order to hold the soil, adding some native water plants and exotic irises (a favourite of our clients).

While we needed to contain the flow of water during periods of heavy rain, we also had to contend with the water course drying out very quickly and the rocks baking in the sun (and any surrounding plants with them). This was also true of other rocky patches across the hill. These “hot spots” around the rocks were mostly spaces with shallow soil, so we introduced a number of succulents into these areas, filling in the gaps and reducing space for weeds.

Given the many rabbits that make their home across these hills, we needed to ensure that we chose tough and hardy plant species that were less palatable, while also being able to withstand the weather conditions. This meant that we ended up using a lot of natives, taking care to select plant species that wouldn’t seed and become weeds for the surrounding properties. As the roots of these plants develop, it will be harder for rabbits to dig among them. 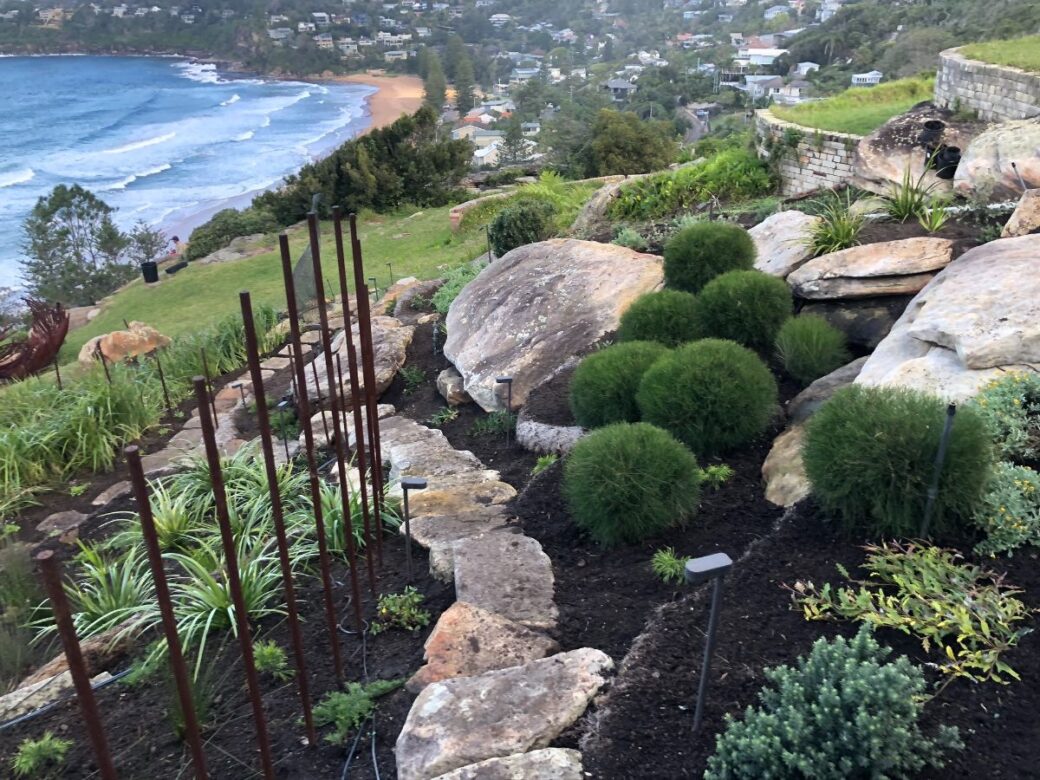 For us, the biggest surprise was how quickly the weeds came back once we disturbed the soil. We also underestimated the establishment period for this garden with a high demand for care and maintenance while we contended with the weeds and new planting took root.

Given the exposure of the site, we did a lot of research into plant species to ensure that any newly introduced plants would survive and thrive. Our clients wanted an interesting and diverse garden, but given the spectacular views, their directive was that none of the planting should be tall. For this reason, we made extensive use of the casuarinas, grouping and shaping them into balls to mimic the rocky landforms and undulating landscape, while also speaking to the striking architecture of the house and sculptures.

Our research revealed that this approach to planting would also provide a safe habitat for native birds, eliminating the tall trees that provide a sanctuary for birds of prey. So this was definitely a case where the aesthetic imperatives complemented the environmental concerns we’d had going into the project – a happy end result.

While we had planned to clear the bottom level when we completed the initial clearing and planting, it soon became apparent that that area of the site was too wet and too steep. This will need to take place at a later stage, once our initial planting has fully taken root and the new garden is fully established. 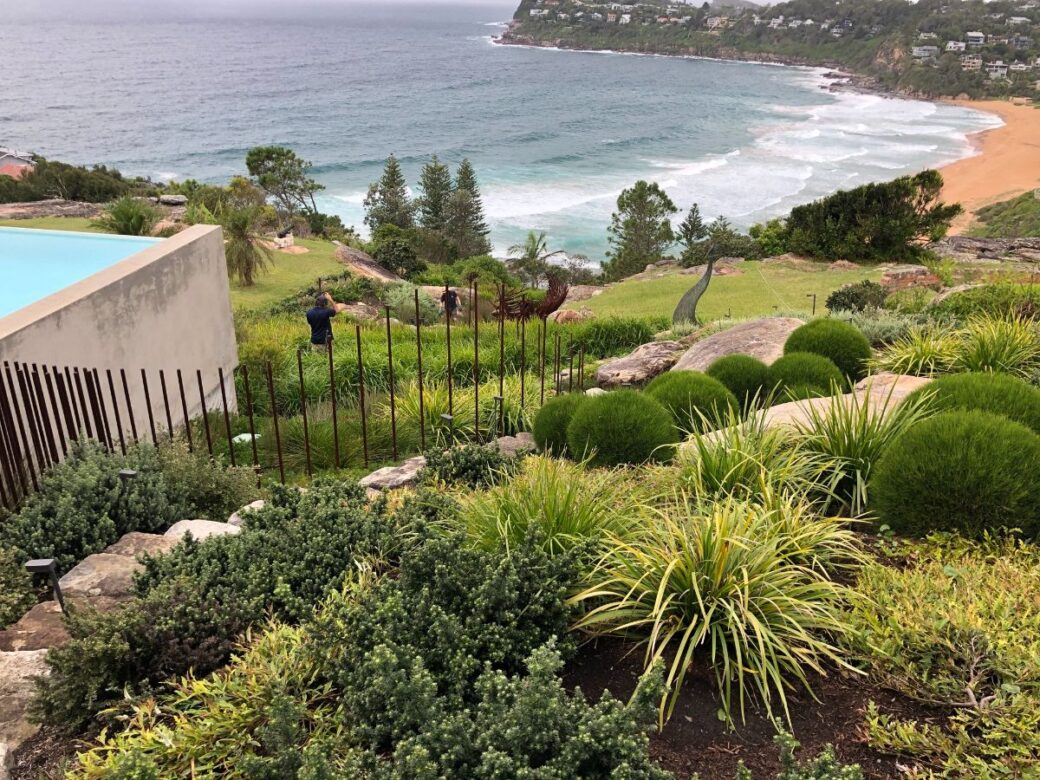 We first began work on this garden in September 2019, with planting in late November 2019. Our work here is ongoing as the garden evolves and settles into the space. Gardens like this take time to grow in. They are not instantaneous, but the joy in watching them develop is tremendous. We thank our clients for being such creative and supportive collaborators on this project.