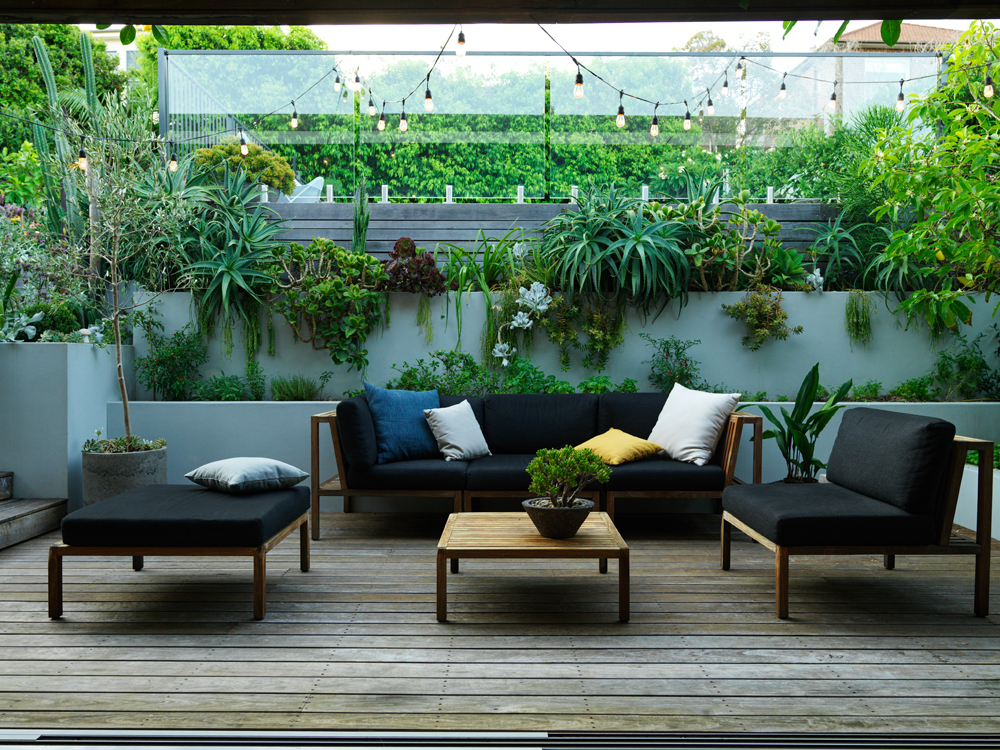 When Pepo directors Nicola Cameron and James Perkin found their future home in Maroubra, it was a tired house in need of some serious work on a sloping block with patchy grass, a scrappy garden and an old concrete swimming pool. To say it presented some challenges would be an understatement.

Given their experience in landscape design and construction, they knew how essential the garden would be to the success of their eventual renovation and they factored it into their budget and plans from the very beginning.

Unfortunately gardens are often forgotten or deprioritised, tacked on as an afterthought at the end, just as the money is running out. In this project, however, the garden is a major asset that enhances the features of the property and offers a seamless connection between indoor and outdoor living spaces. 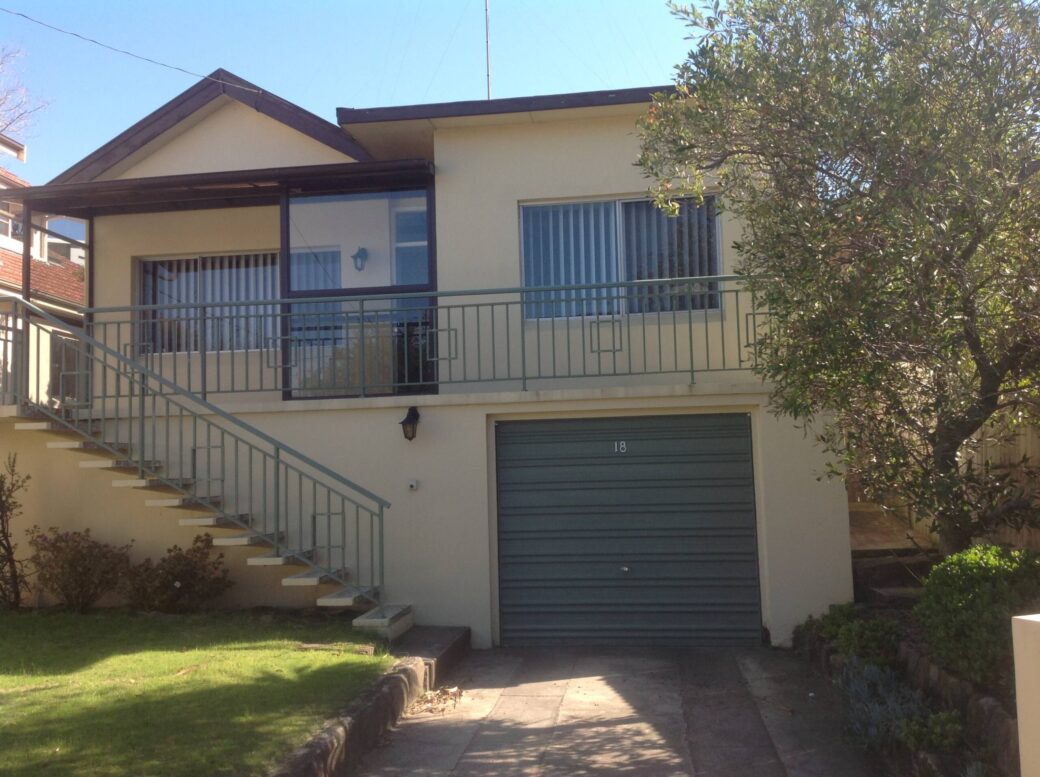 The house and existing outdoor spaces had been untouched for a number of years, with very little work done to maintain or improve the garden.

While the planned renovations mostly kept the front façade of the house in tact (aside from adding a second storey and a much needed coat of paint), Nicola and James knew that they could achieve a lot with a creative and considered garden design. It was important to them that the front garden serve as a transitional space, welcoming them home and offering privacy from the street and onlooking neighbours.

The back garden was another matter entirely. An old in-ground pool sat nestled in the side of a sandy hill with sightlines from a number of overlooking neighbours. The planned renovations would extend the back of the house into this space, leaving very little usable ground for the garden with its existing topography. 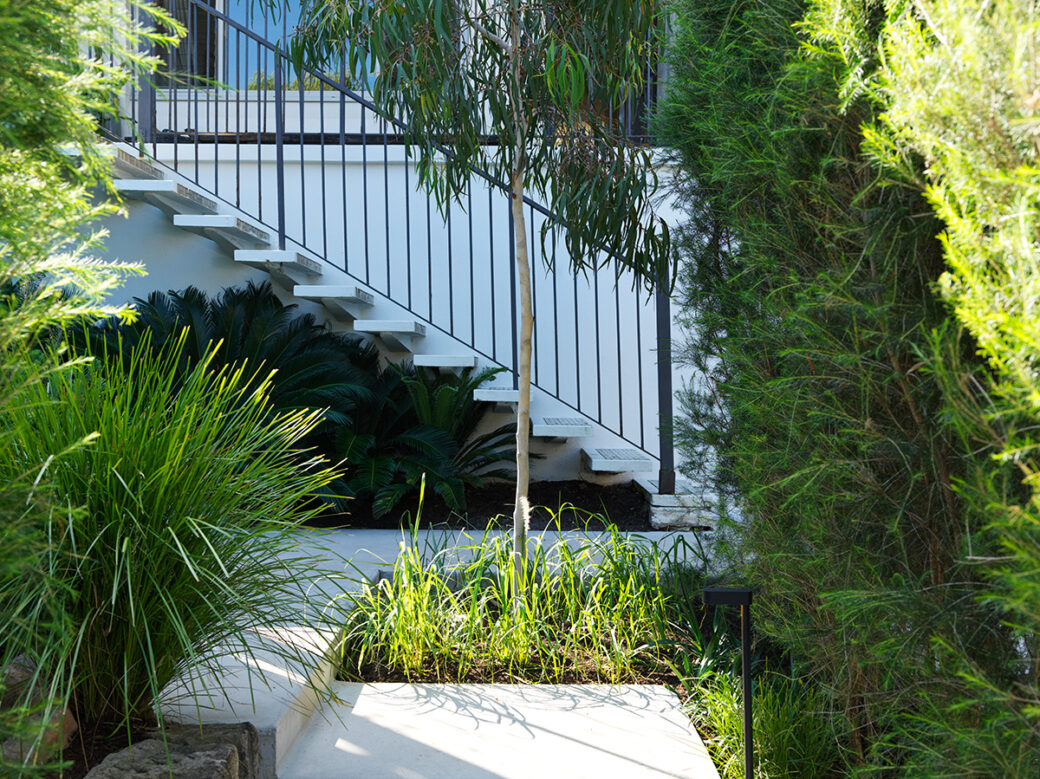 For the front garden, Nicola and James envisaged a restrained, pared back design concept using a palette of mostly native plants and a smooth white concrete path, chosen to match the newly painted house. Wanting the garden to create a sense of arrival, they avoided a straight path from gate to front door, designing it instead to wrap around a beautiful young Corymbia citriodora ‘scentuous’ (Dwarf Lemon Scented Gum).

Plants were chosen carefully to screen neighbouring properties and shield the bedroom windows at the front of the house, with careful consideration in selecting species that were drought resistant and native to the area. Given the proximity to Maroubra Beach, they also needed to be able to withstand high winds and salt.

Larger leafed natives were planted along the property’s perimeter, while smaller leafed varieties were chosen for interior garden beds. This gave the garden clearly defined boundaries, while not blocking off the internal spaces or obstructing the sense of flow through it.

A lighting design was also implemented to light the path and to draw focus to the garden’s natural beauty, even at night. Practical and beautiful, it demonstrates how a well-considered lighting plan can enhance a garden and reveal new aspects of its design. 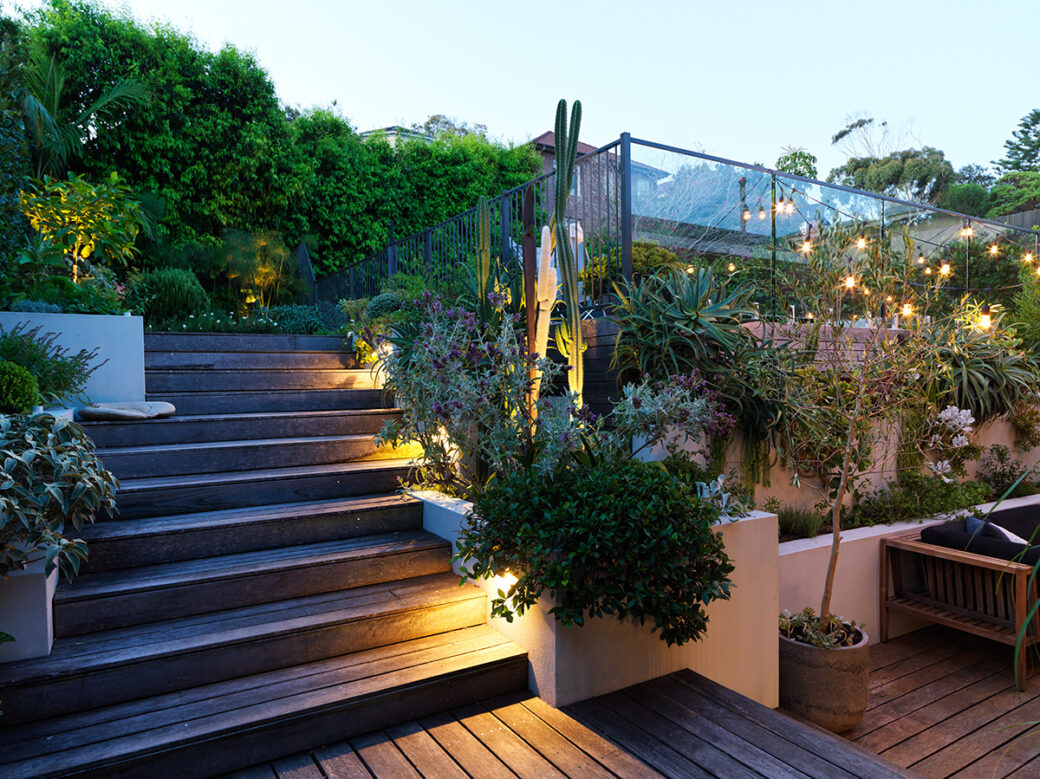 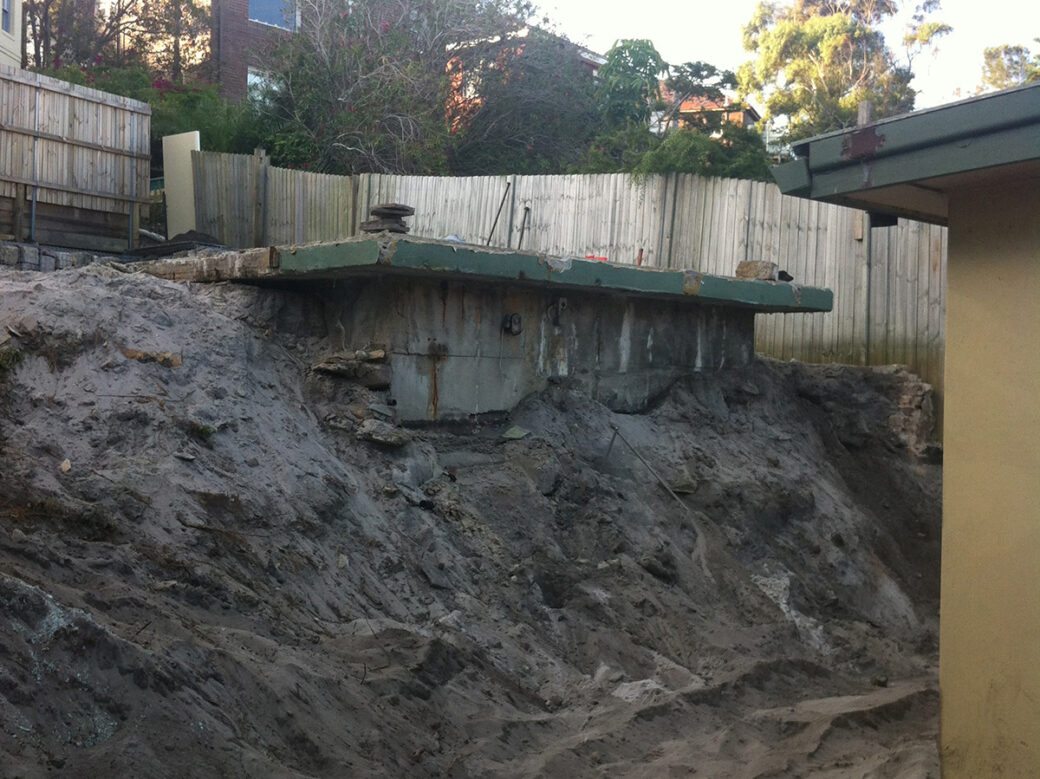 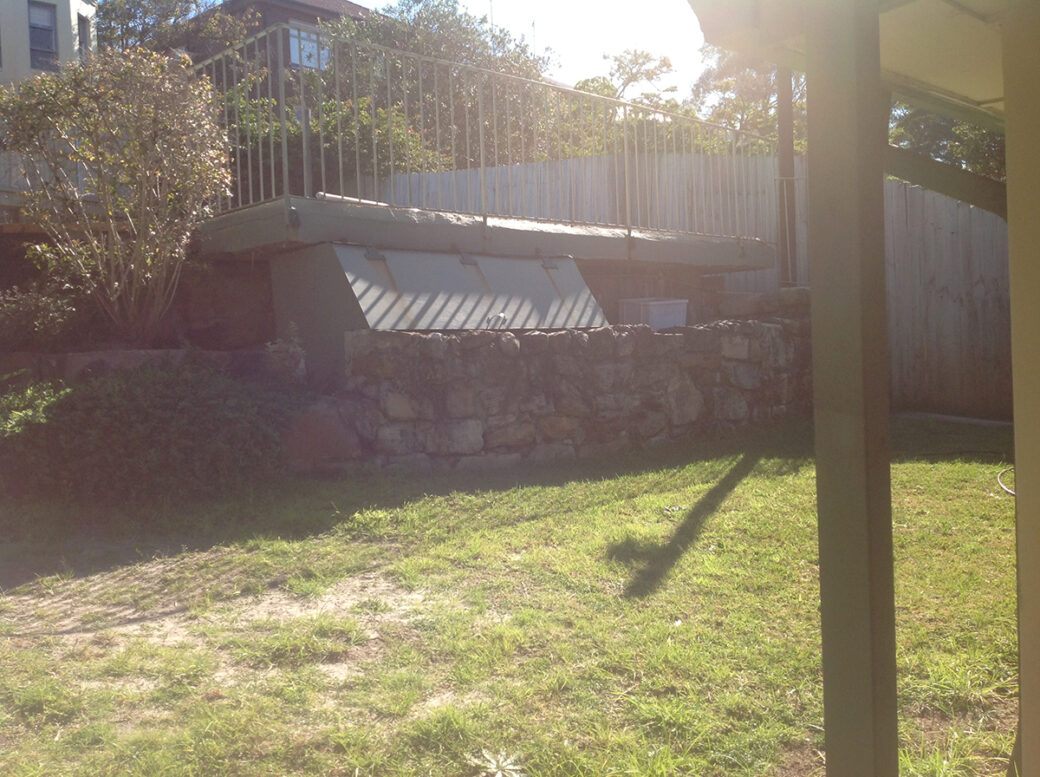 The concrete swimming pool at the rear of the property was originally installed in the 1980s and had aged a lot since then. This was a feature that Nicola and James wanted to keep, but they knew it would need significant restoration work, as well as considered landscaping and planting, to give the surrounding space a stronger sense of flow and to ground the pool in the site.

Before any landscaping could take place, though, they needed to conduct major excavation works, creating three level terraces across the hillside. This was programmed to occur while the house renovations were taking place so that site access and building works could happen efficiently and in consultation with each other. 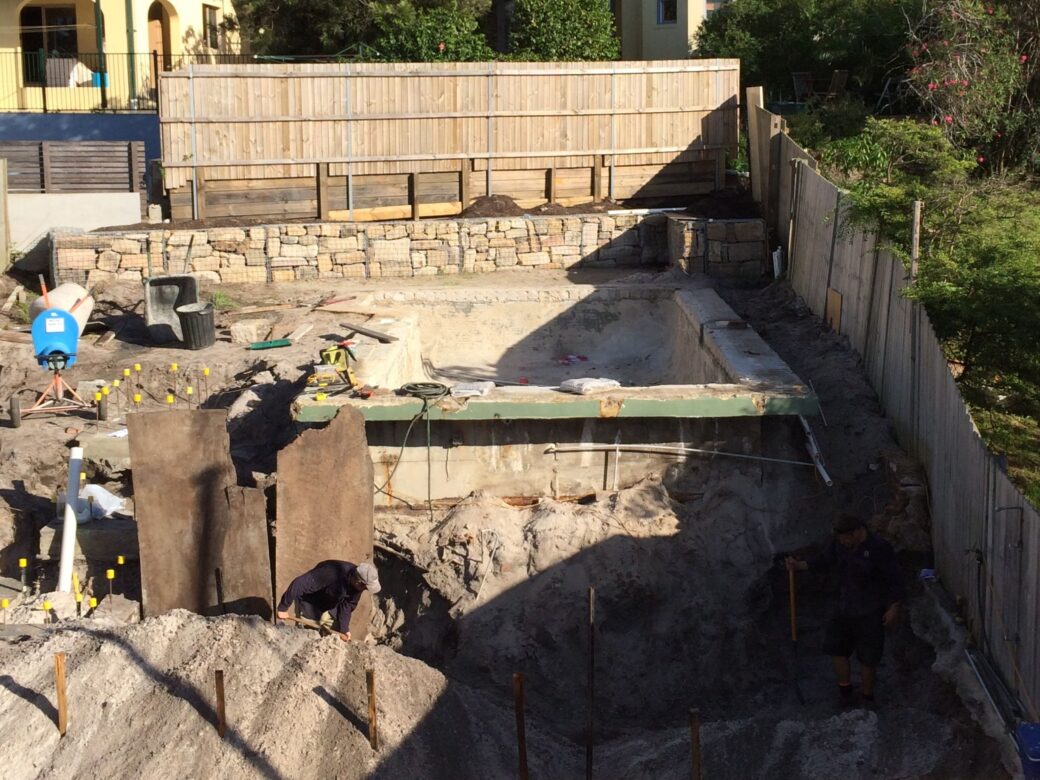 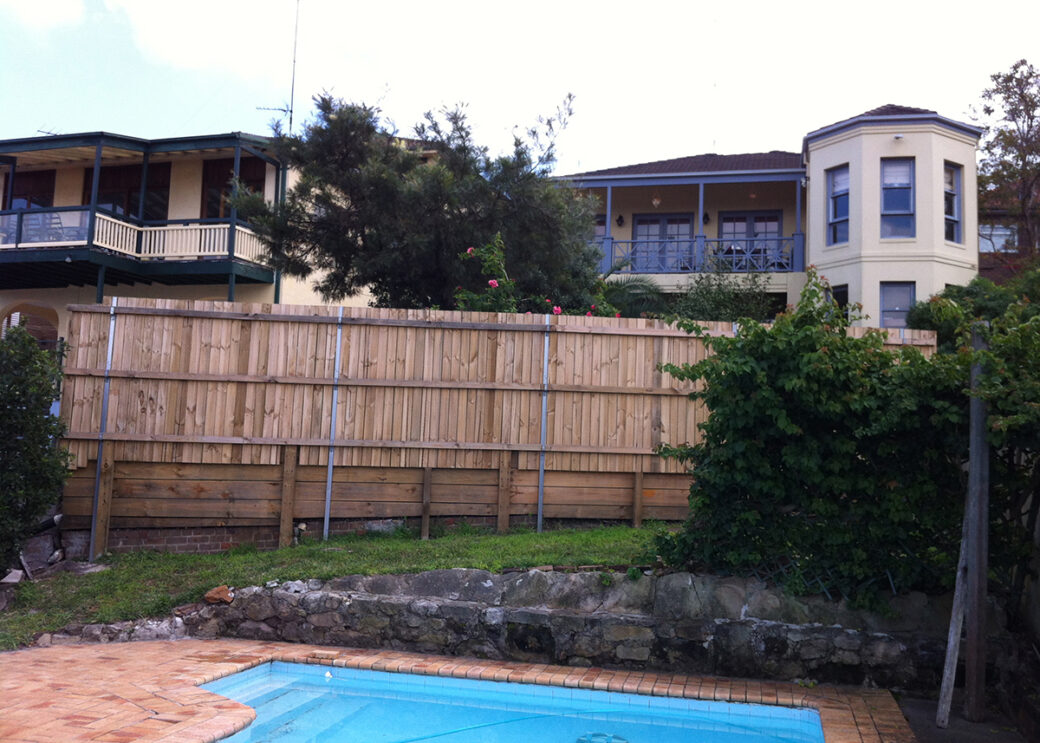 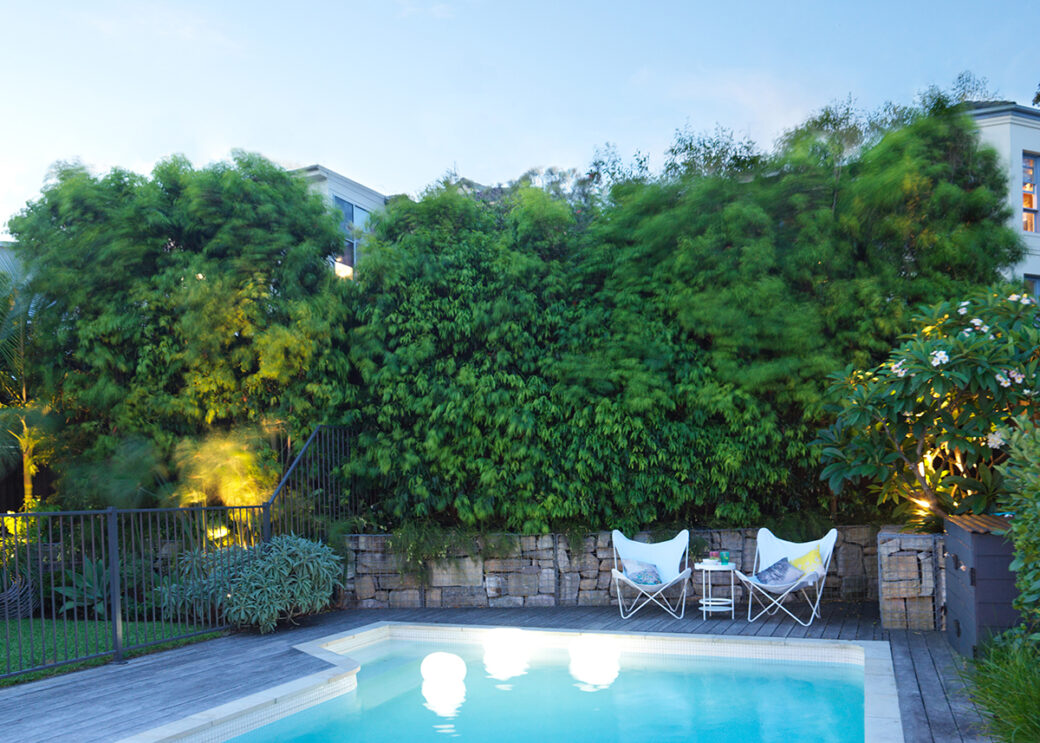 More than 25 tonnes of sand and builder’s rubbish was removed from the back garden in total, with sand stone found on site being used in the gabion walls along the rear boundary.

Once this work was complete, Waterhousea floribunda (Weeping Lilly Pilly) was planted along the fence line to shield the wooden fence and provide privacy from the neighbouring houses at the rear. Weeping Lilly Pilly is ideal for hedges such as this as it is fast-growing, thick and hardy while bringing a softness to the space with its leaves moving gently in the wind.

The pool was sandblasted and given new tiles and coping. Swimming pools are very costly to install, so if you have an existing pool that could be refurbished, this can be a good way to save money and still achieve an upgrade and enhanced design aesthetic.

The entertaining deck was designed to extend the floor print of the house, providing a transition between indoor and outdoor living with large sliding glass doors that open fully into the space.

The retaining wall at its rear (between the pool above and deck below) was a key part of the garden design and included two levels of planter boxes. A decadent array of succulents were chosen to fill the top planter box, overflowing like a waterfall and providing vibrant colour and textures, while in the planter box below, fresh herbs gave off a luscious scent and kept mosquitoes at bay on balmy summer nights.

To the side of the entertaining deck we built another slightly higher deck, which housed an outdoor shower and served as an intersection point between house, side path and the stairs leading up to the pool and lawn on the terrace above.

Staggering the terraces across the garden allowed us to continue the circular, non-linear flow established in the front garden, completing the journey from front gate to swimming pool at the top rear of the property. 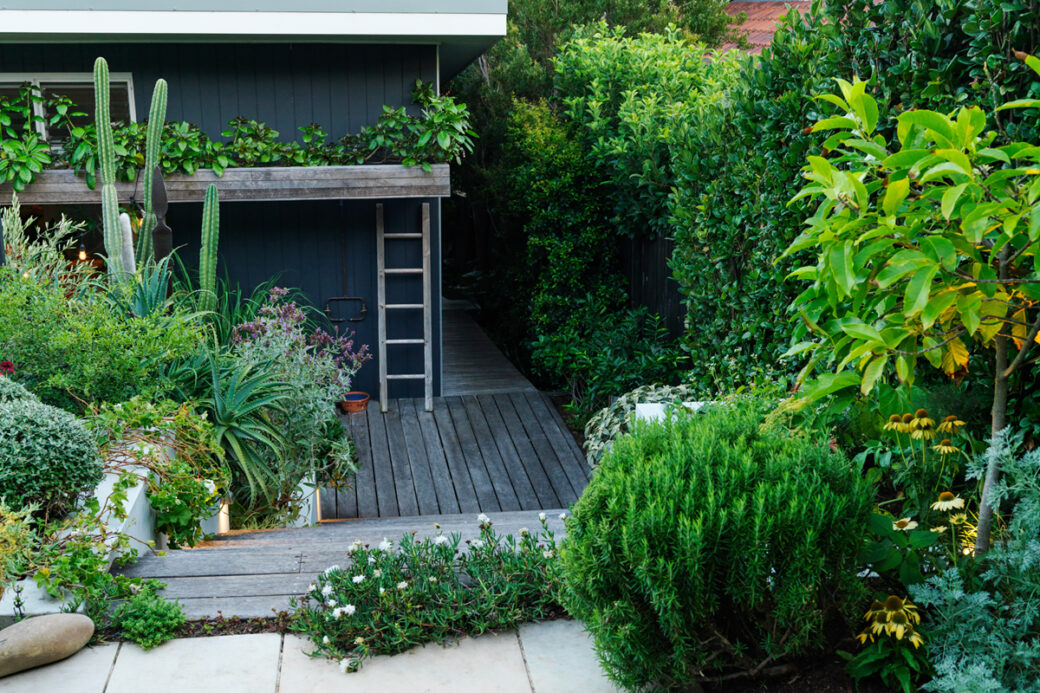 With such a long block and no rear entrance, access was a major challenge on this project with no options for bringing machinery through to the rear of the house. This meant that everything had to be hand-manoeuvred in and out of the property, and extra time needed to be factored in as a result.

Another key challenge was the sheer amount of material that needed to be removed from site – we never would have guessed that it would be in excess of 25 tonnes. We tried to utilise the material found on site wherever possible (such as the sand stone in the gabion walls) but it was still a huge amount to excavate, move through the property and remove.

Similarly, we needed to explore how we would travel up to the pool without laying more concrete around it and introducing additional hard surfaces that would ultimately impact the budget, as well as the site’s ability to absorb and retain water. Instead, a natural timber decking was chosen to wrap around the pool and was used for the stairs and lower decks, allowing water to fall between the boards and be reabsorbed into the earth.

The soil itself also presented a challenge that needed to be considered throughout the garden design and planting process. Being in such close proximity to the coast, it was very sandy and requires constant soil improvement, even now, as the silicon in the sand causes it to rise to the surface, despite all of the additional soil and fertiliser that we’ve introduced over the years.

One of the key lessons that we learnt in designing and developing this garden over a number of years is this: views aren’t everything. While the top storey of the house does have spectacular views out over the Maroubra coastline and rifle range, this garden is one that invites you to look inwards. Lush and enveloping, it cradles you in a journey from the outside world to a sheltered oasis at the intersection of house and hill. Never was this sense of sanctuary more vital than during the last two years of COVID-19 and lockdowns.

When designing your garden, make sure to also consider the space from different vantage points – everywhere, in fact. One key example of this was the pool in relation to the house. Given that the pool deck offered views back down over the house, we needed to choose pool colours that would work well with the colour scheme of the house’s exterior. Approaching your garden in this way will ensure that you end up with a design that is integrated and holistic, perfectly complementing your house and your lifestyle.

For more images of this stunning garden, take a look at the Maroubra project page and feel free to get in touch if you have a garden design project you’d like to discuss with us. 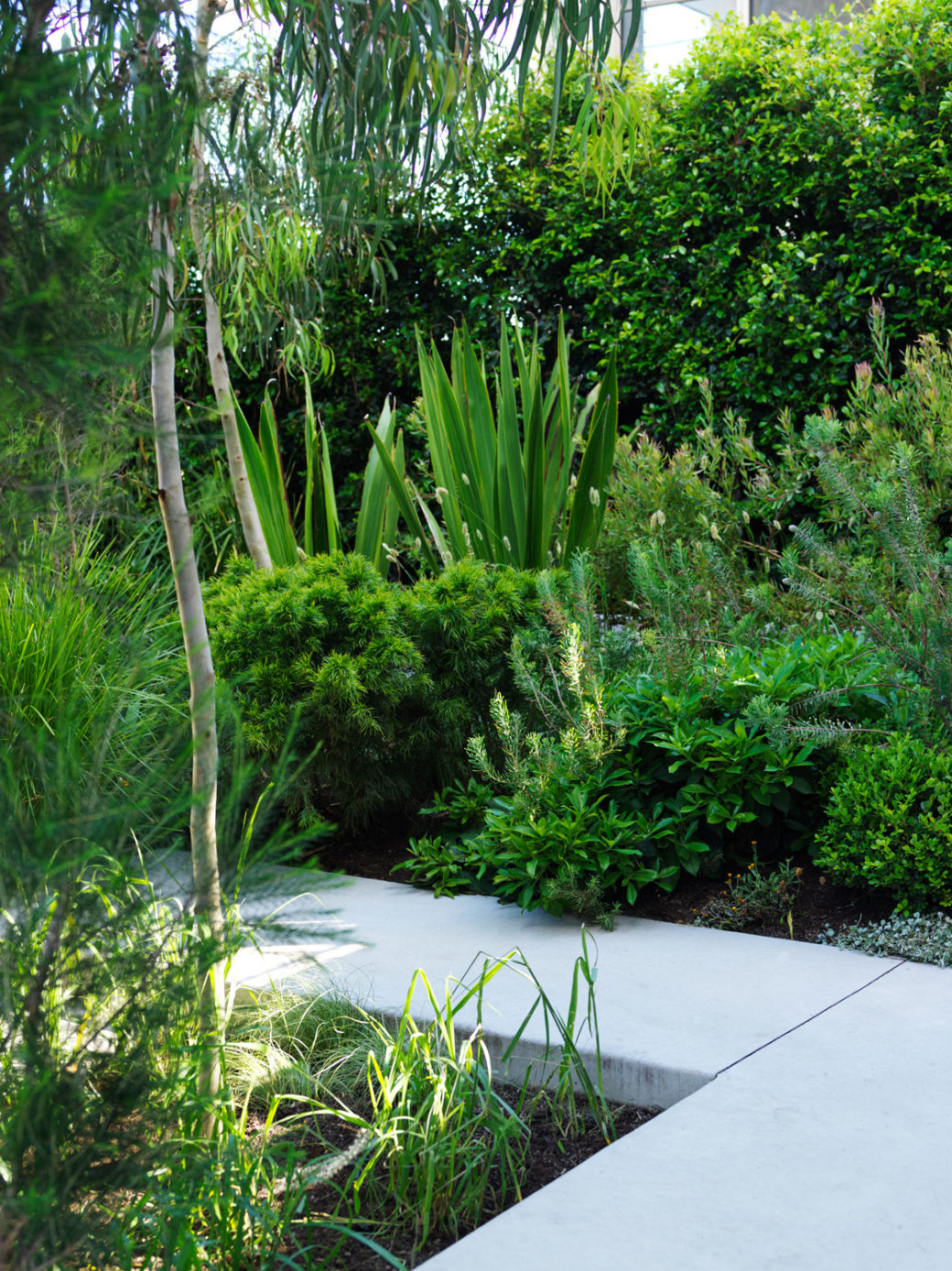 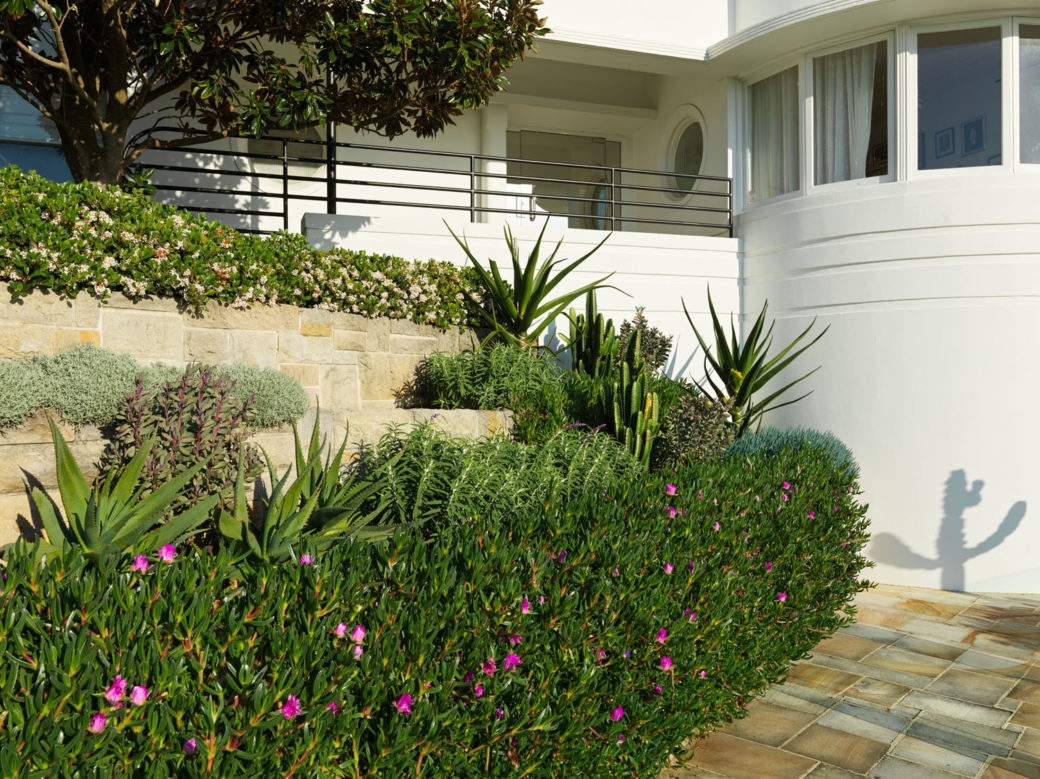 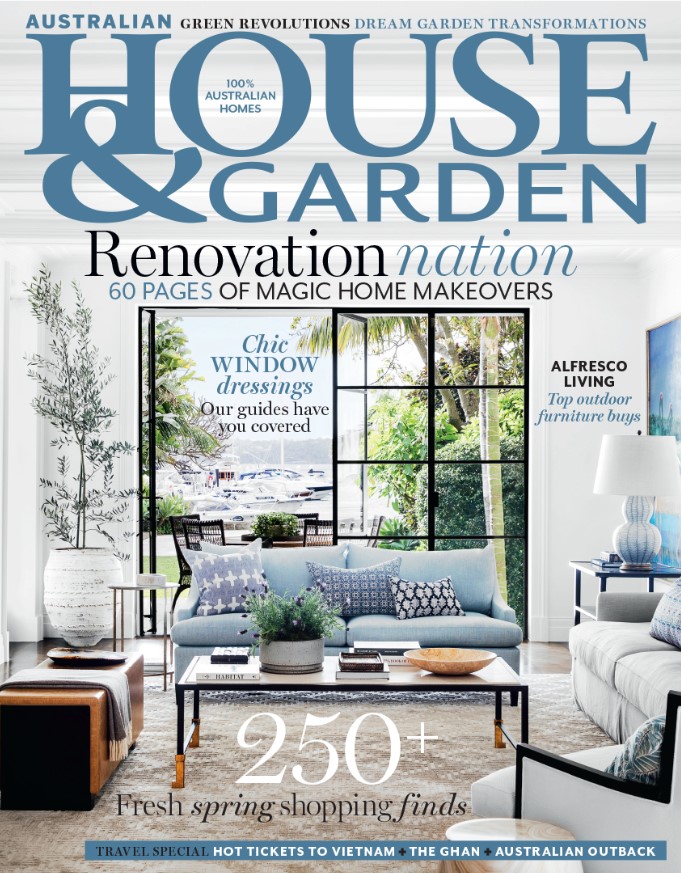 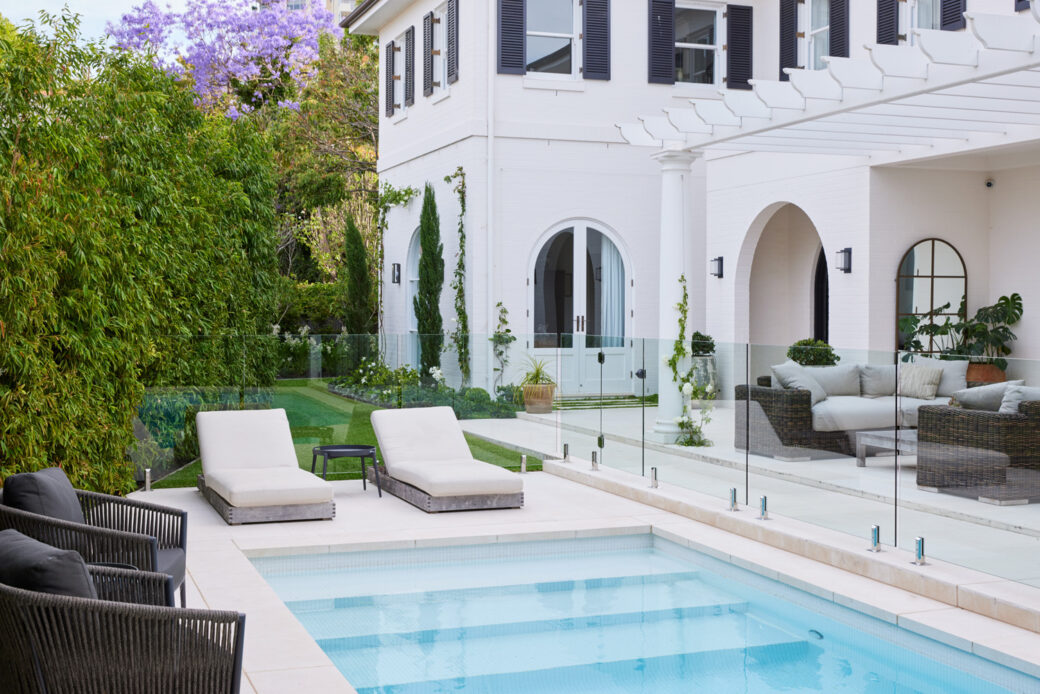